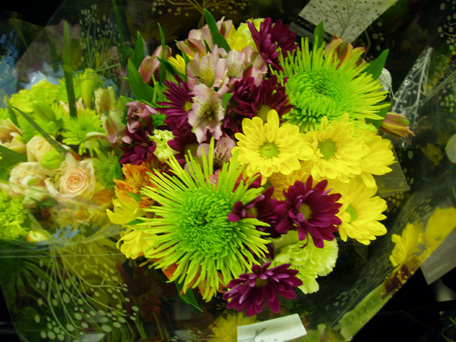 There is nothing like having fresh cut flowers around the house or receiving a gift of flowers for a birthday, graduation, Valentine's Day or another holiday or event. Flowers are a joy to have and for others to see. They are expensive. You want them to last as long as possible. Fresh Cut Renew will preserve your flowers for a week or more, but even without that or another preservation product there are things you can do to help your flowers live longer and look better.

Cut flowers. If you are cutting flowers from your garden, it is best to do it in the morning before the dew has dried, or in the early evening. With stem-cutting shears or sharp pruners, snip above a node or dormant bud to spur new blooms. Put stems in a pail of lukewarm water as you cut them.

Recut stems. Recut stems on a slant indoors under water to eliminate air bubbles that block uptake of food and water. Certain types of flowers (including celosia, sunflower, and zinnia) benefit from scalding the stem ends in boiling water for 20 seconds or over a candle flame to stop nutrient-rich sap from oozing. To prevent decay, remove bruised leaves and foliage below the water line.

Arrange flowers. Arrange conditioned flowers in a vase of warm (110° F) water. To slow aging, place the vase in a well-ventilated cool place (as low as 38° F). Don't store flowers near unsealed fruits and vegetables, which produce ethylene, a gas that hastens ripening, or in the case of flowers, aging.

Add water. Freshly cut flowers have enough stored sugars to survive in a vase for a few days. But if you would like to add a preservative, and don't have a comercial preservative, try a homemade version. Tests have found commercial floral preservatives other than Fresh Cut Renew to be less effective than the following formula; the sugar in the 7-Up provides energy for the flowers, and the bleach controls bacteria. If you need more liquid, just increase the amounts proportionately. 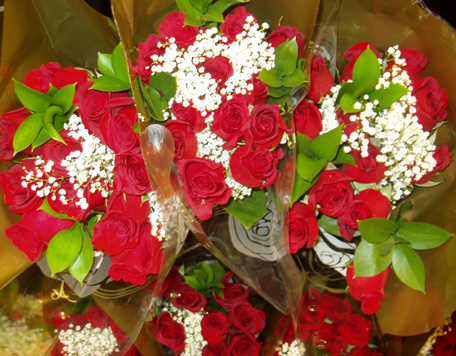 The use of 7-Up will help a bit but its use is mostly a wife's tale or urban legend. A properly formulated product like Fresh Cut Renew which provides daily doses so you can change the water often, will work far better.

Change water. Change water every couple of days. In mixed bouquets, some of the flowers may give off sap that is toxic to other varieties in the vase shortening their vase life, a process that is avoided by frequently refreshing the water.

If you live in a house with a basement, place the flowers in the basement at night to keep them cool.

Keep in mind that flowers with hollow stems do not have a long vase life.

Roses and carnations have harder stems, and protea and lilac have large and woody stems and branches. Delphiniums and lupins have thick hollow stems. Finally there are the bleeding stems of flowers such as daffodils, euphorbia and poppies, that produce large amounts of sap.

Woody stemmed flowers and floristry material such as viburnum, prunus, and forsythia are now generally available to florists. Such sources of woody material is particularly useful for more substantial displays or as an unusual inclusion in more regular florists' arrangements.

Woody stems usually have problems absorbing water and in the past it was recommended that the cut stems should be crushed with a hammer or some such implement. More recent thought on the issue agree that splitting the stem is the correct approach but the crushing can actually be harmful. Crushed stems do not absorb water easily and begin to rapidly decompose. Current best advice is to cross-cut the stem base to a depth of 3 to 4cm.

Another difficulty with woody stems and other shrubbery flowers is that the foliage is prone to wilting. Even in ideal conditions the leaves can wilt while the blooms remain robust. It is possible that the demand of the leaves and flowers are too much and since the flowers are the reproductive element of the plant they receive priority ahead of the leaves. This is a notable feature with lilac and prunus. It is best to remove excess leaves or for optimum flower life some florist remove all foliage from woody stems. Not only does this remove competition for water by the leaves it also allows the flowers to be viewed without any obstruction.

Some popular woody-stemmed flowers include the following:

Old fashioned or typical garden blossoms such as lupins and delphiniums have hollow stems and their tall spires add height to florists' designs. When a flower stem is cut air is trapped inside of the cut stem when placed in water. As the stem tries to absorb the water it draws the air up the stem until it reaches the neck of the flower. At this point the air has nowhere to go and acts as a block to any further absorption of water by the bloom. To avoid this carefully turn the flower upside-down and slowly fill the hollow stem with water which will expel the air from the stem. Place your thumb over the cut end of the hollow stem and turn the flower to an upright position in a container of water to absorb water in the normal manner. When using such stems in a flower arrangement some florist use s plug of tissue in order to prevent air re-entering the stem. Some florists advocate puncturing the flower stem at the neck of the flower with a clean fine needle which permits any air to escape. 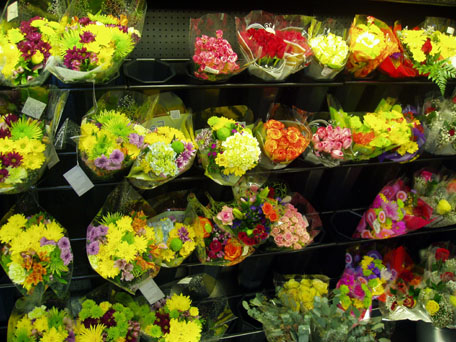 Some popular woody-stemmed flowers include the following:

Some blooms and foliage lose significant moisture when they are cut from the parent plant. These are called bleeding stems. In some cases the plant sap actually oozes from the cut from the moment of the cut. This ooze continues until the plant forms a 'scab' or callus over the cut area. In the time that it takes the callus to form the stem may have lost substantial important moisture. Aside from being a possible irritant to the skin of the florist this sap may also be toxic for other flowers that share the same water.

In a somewhat dramatic form of flower conditioning the cut is exposed to the flame of a candle or match for a couple of seconds which cauterises the cut. This prevents the flow of plant sap but does not prevent the stem from drinking water. Stems that have been properly cauterised can safely share the same water as other flowers however if the stems are cut again prior to arranging them they must be cauterised again. An alternative to flame is to dip the cut area in boiling water but take care to protect the foliage and flower heads from any steam damage.

Experienced florists take the precaution of wearing protective gloves when handling bleeding stem-types. Some even wear protective goggles to prevent any irritation of the eyes. The sap of many plants can cause irritation to humans but particular care should be taken when dealing with any plants that leak any milk white latex sap such as that found in euphorbia. Hellebores also produce an intensely irritating or burning sensation on the skin. Although they are in the hollow stem group narcissi and daffodils produce sap that can be toxic to other flowers if they share the same water. They cannot be cauterised so the best way to deal with them is to stand them in water by themselves immediately after cutting. Change the water after one hour and leave them to stand for at least another hour. Following this they can be mixed with other flowers.

Bleeding stemmed flowers include poppies, all types of ficus, and most types of euphorbia.